oday the cover art for Tad Williams’ new long-awaited novel set in the Osten Ard universe, The Heart of What Was Lost, has been revealed. The art features a witchwood sword with a white rose hilt. The foreground shows a snow-covered landscape, with ominous, dark mountains in the background. The novel is a sequel to the original, now-classic “Memory, Sorrow and Thorn” series; the new book will be published in January 2017, followed closely by four additional Osten Ard novels, titled The Witchwood Crown (release date: April 2017), Empire of Grass, The Navigator’s Children, and The Shadow of Things to Come. 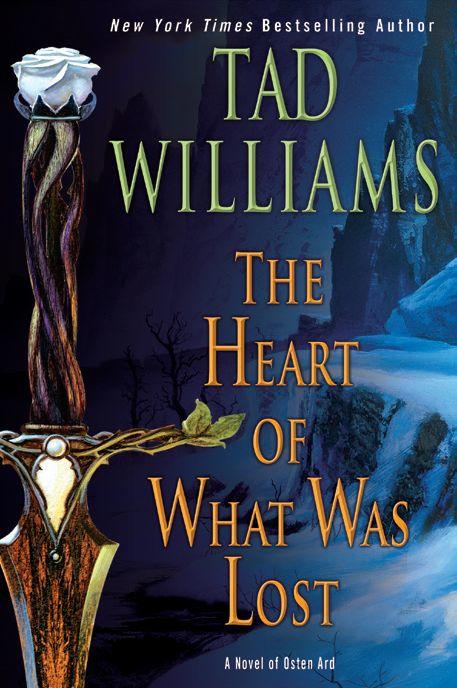 Williams describes the plot of The Heart of What Was Lost as: “[The novel] takes place in the half-year after the end of [To Green Angel Tower], and tells of the attempt by [Duke] Isgrimnur and a force largely made up of Rimmersgard soldiers to destroy the remaining Norns as they flee back to their homeland and their mountain. Of course, it gets a bit more complicated than that. It also answers some questions about what actually happened in the immediate aftermath of the fall of Green Angel Tower.”

The main characters  in the new novel will be the returning Rimmersmen characters Isgrimnur and Sludig; Isgrimnur is the Duke of Rimmergard in “Memory, Sorrow and Thorn”, a point-of-view character. Sludig was his lieutenant, and a dynamic and important character in the original trilogy; it is he who accompanies Simon, Binabik and Qantaqa north from Naglimund Castle, skirting around the western and northern sides of Aldheorte Forest in their long, cold quest to retrieve the Great Sword Thorn from the “Rhymer’s Greate Tree”. He then travels south with Binabik and Qantaqa around the eastern edge of Aldheorte to the Stone of Farewell, where he becomes Prince Josua’s Man Friday, accompanying the prince south to Nabban and then back north to Hayholt Castle.

The Heart of What Was Lost is now available for pre-order from Amazon, Barnes and Noble, and other retailers worldwide.

Tad Williams is busily writing the first volume of the new Osten Ard saga, The Witchwood Crown, volume one of “The Last King of Osten Ard”, a sequel trilogy to the classic “Memory, Sorrow and Thorn” series. Where would you like the action to take place? Choose up to ten regions below.